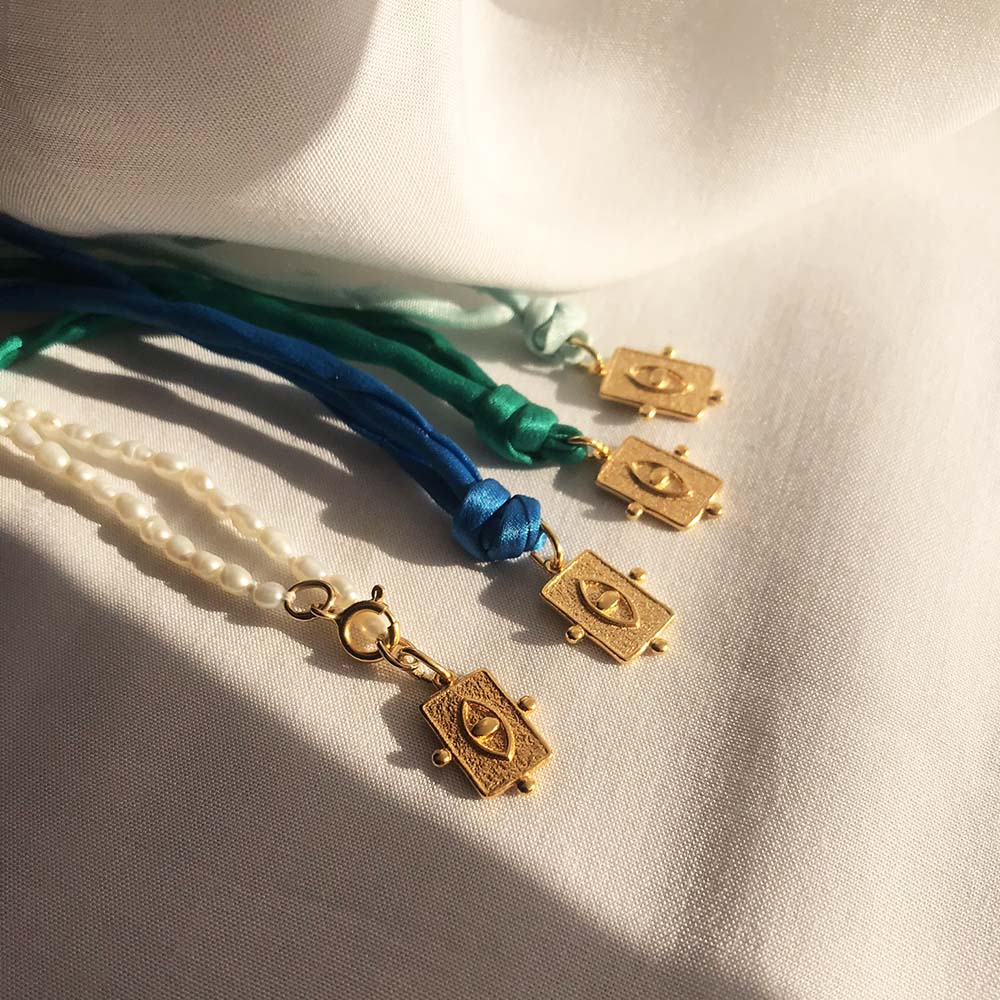 Barbóra’s eye talisman has an amorphous round shape with three knots along protecting the wearer against evil eye charging him with good vibes! This is an allegorical idea blending the eye charm, the number 3 (3 knots) as a common triangural belief in many cultures and the knot praying way with each knot to have a unique wish for the receiver!

The belief of the evil eye dates back to Greek Classical antiquity with references by Hesiod, Plutarch, Plato and many others poets and authors. It is though a widely belief among many cultures around the world. These talismans or amulets were created to protect against the evil eye. 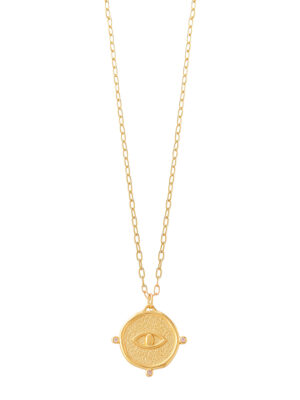 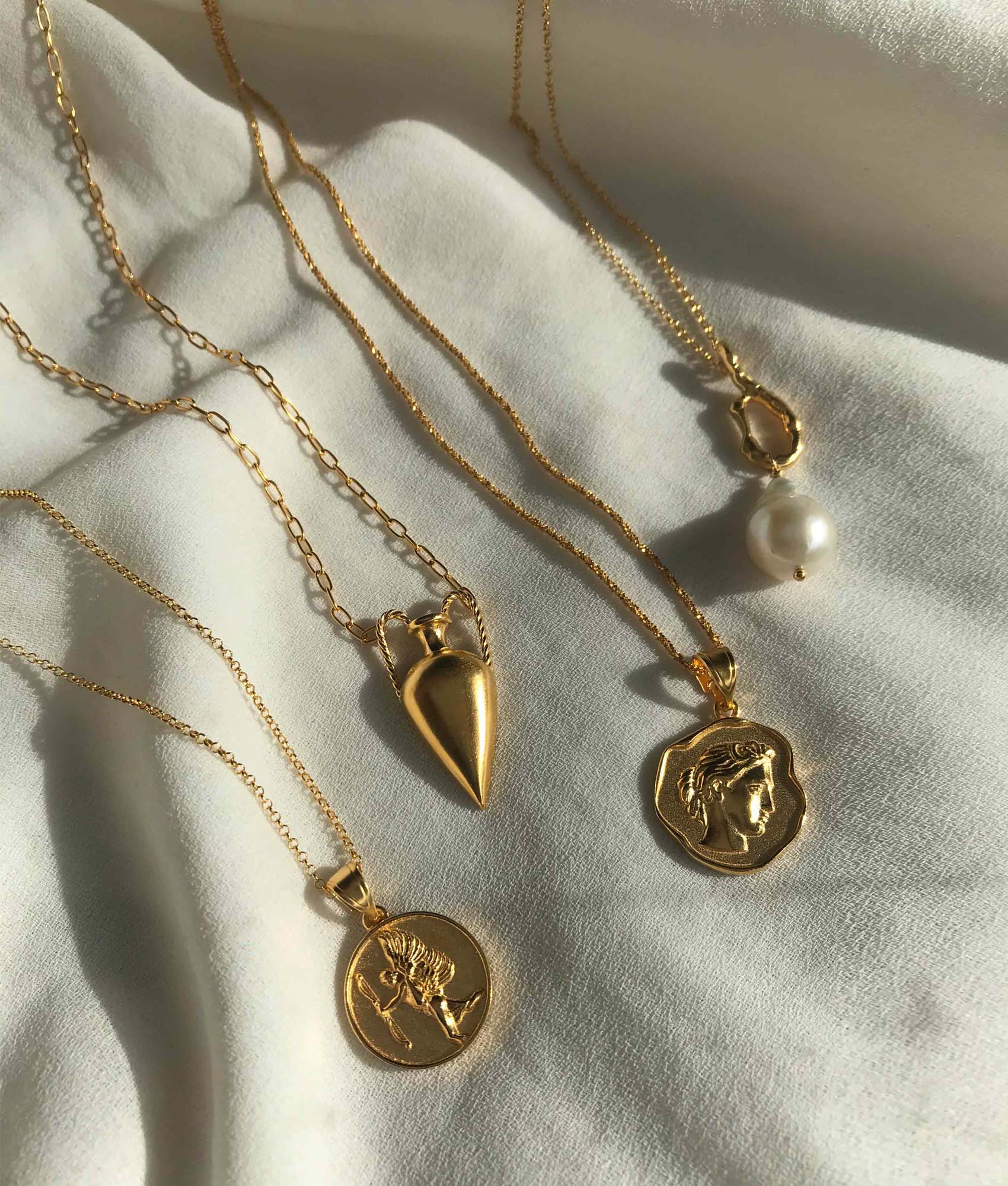 Eros and Psyche collection is based on Greek Mythology describing the love story between gods and mortals. Every piece of this collection narrates a different part of the myth unfolding therefore the storytelling. This collection reminds us the ordeals that soul must undergo to achieve true love and hapinness.

Once upon a time there was a king who has three wonderful daughters. The youngest, Psyche, was much more beautiful than her two sisters and looked like a goddess among mortals. The fame of its beauty had been spread throughout the whole kingdom and men kept coming to her palace to admire and worship her.

Aphrodite, goddess of Beauty ,jealous by such blasphemy as she heard about Psyche and all the attention that people paid to her, she orded her son Eros to avenge Psyche by making her enamored of the lowest of all human beings.  But at the sight of this beautiful mortal girl, Eros, god of Love, fell hopelessly in love!

Psyche’s father and King, in despair at seeing his daughter unmarried despite her beauty, consulted the oracle of Miletus. The oracle predicted terrible disasters if the girl was not abandonded at once on a rocky mountain. Thus Psyche followed the oracle and climbed on a mountain. Alone and trembling on a rock as she was, she suddenly felt the caress of a light breeze. This signaled the coming of Zephyr. He bore her away to a marble palace covered with precious stones which now will be her home.

Every night a mysterious visitor was coming to Psyche’s room making love to her. Although his identity should never be revealed forbidding her to try to see his face.

One night Psyche couldn’t obey to her lover’s order not to see his face; she lit her candle and saw that he was none other than the god of love. But a drop of the burning candle

suddenly woke him and as  Eros felt betrayed he fled away without forgiving her. Desperate Psyche set out in search of her lover as she was remembering his last words before flying to the dark sky; ‘Love can not live without trust’. Psyche regretted of what she had done, she went to the temple of Aphrodite asking her to persuade her son to get her back. She was ready to prove her love for Eros!

But Psyche’s destiny was written by Aphrodite, which has not overcome her jealousy for her. She inflicted terrible ordeals on Psyche leading her from the Underworld to Olympus, trying to make her miserable and lose her beauty.

For the last of the ordeals, Aphrodite demanded that Psyche should bring back an amphora from the Underworld, strictly forbidden to be opened. But Psyche’s curiosity got the better and no sooner had breathed in the terrible fumes that made her falling into a deathly sleep. – Eros as seeing Psyche lying motionless, rushed to her and touched her with the tip of his arrow to make sure she was not dead.

Moved by such devotion, the Olympian gods, finally decided to grant Eros Psyche’s hand in marriage. They gave her nectar and ambrosia making Psyche immortal and the Goddess of the Soul as the Greek word ”psyche” implies.

Barbóra’s Amulets and Symbols Collection is inspired by Greece’s enormous cultural heriatge – the Greek Mythology and the reminders of our ancestors! Each symbol has a unique meaning symbolizing the hidden story behind the jewel!

As nature was the Ancient’s favoured muse, the ‘Athenian Akrokeramo’ couldn’t not be missing from this collection as well ‘Baroque Pearls’ too. Principles like Sun and moon and meanings like rebirth, fertility, harmony, balance, health, evil protection, good luck, wisdom and transition to higher consiousness are presented to this collection through ‘Cosmogony’ Amulet, ‘Snake of Hygieia’ and Sphinx medallion! Explore the symbol that represents you!

Free shipping within Greece over 40€

Free shipping in other European Counties over 150€

Free shipping in the Rest of the World over 250€

Shop Now
We use cookies to ensure that we give you the best experience on our website. If you continue to use this site we will assume that you are happy with it.Ok